We leave Spain on a high-speed train to cross the border into Perpignan, France. We have a rental car reserved at a nearby airport. During the solid twenty-minute cab ride to the “nearby” airport, when I explain (in French, as our driver only speaks French) that we are headed to Toulouse, he strongly suggests we stop by the walled-in medieval village of Carcasonne.

“You’ll see it from the highway,” he assures us.

As he says it, this triggers a memory of our French hosts recommending Carcasonne when we spoke about planning this trip. We decide we can spare the time on our drive, estimated to last somewhere between four and six hours.

Indeed, as we settle into our WiFi-less vehicle, after only an hour or so, Carcasonne’s turrets peek over the French trees and countryside.

“Let’s go check this out,” my husband says as we take the sortie (French for exit) off the highway. A few minutes later we are swiping our credit card and turning into a parking spot in the village’s gravel lot. For some reason, my family seems to suspect at any moment I am going to steer them into some boring rabbit hole of something super lame. Because this suspicion simmers close to the surface, I also know we need to get our money’s worth out of this paid parking. And I hope that this village is going to be awesome.

We walk toward the walled entrance. Another payment area stands off to the left, between us and the entrance. It isn’t clear what we will have to pay for. To enter the village itself? We only want to stroll around, a brief detour from our trip which ends at our friends’ home tonight, and we don’t want to pay every time we turn around. We decide to risk not paying and steer clear of the payment area.

We walk by modern day French guards milling around near their military trucks toward the entrance. There is a legit bridge over a dried up moat. We pass under the stone wall’s massive archway entrance.

There was plenty to see.

The world is filled with charming places. But this place. It is striking. Everything is authentic from the 11th, 12th, and 13th centuries. Granted, the old-fashioned taverns are equipped with plenty of high tech gadgets: electrical outlets, espresso machines, Wi-Fi, Apple Pay and the like. That said, the cobblestone streets, the weatherbeaten towering stone walls, the feeling of an entire village contained within its walled embrace is unmistakably genuine. (Well, because it is genuine.) It’s in a remarkable state of preservation. We are not witnessing some fake medieval trick, like say, Medieval Times or the Renaissance Faire. (Don’t get me wrong–I love both.)

We walk, and are relieved to discover there is no fee to enter the village itself. (Nailed it!)  I turn a corner and find myself at the top edge of the village wall, where a leather artisan sitting under the shade of a tree calls over to me. He has a thick French countryside accent and shows me his leather products with great pride.

“I treat all this leather myself,” he exclaims, tapping his chest. “No harmful chemicals! This leather was not crafted it in China! No China!” He pulls at the outside corners of his eyes to indicate “China” in a very non-PC way, then wags a finger to indicate “no” as if I’m deaf or having trouble following his French. I’m proud to report I am following his French, though his is an unfamiliar accent. He is a salesman, yes, but he his engaging and charming.

As he convinces me of his authentic craftsmanship, he is tinkering with tools at his traveling worktable. He is punching holes and stamping his signature on soft, buttery pieces of leather.

“Feel this!” he insists, handing a piece of leather to me. “I do all the leatherworking,” he declares with earnestness. I compliment his craftsmanship. Bags, wallets, and purses pile up on the side of his table and dangle from the tree branches.

“Smell,” he says. I take a deep breath of the piece of leather. It’s heavenly, the leather smell. After a short time and more clarifications on no chemicals nor China, he points to the doorway of his store, a few feet away. I head inside. The smell of leather fills my nostrils. I inhale again. The whole store is filled with his leatherwork products. Wallets, purses, suitcases, even more than he had outside. Shelves and shelves fill the tiny store’s walls. My kids straggle in behind me, smelling my eagerness to purchase and their keen interest to not miss out on one of these souvenirs.

I buy my son a sky-blue leather wallet with colorful leather pieces inside, complete with a snap and the Monsieur’s signature (Sergio Bedesse) stamped on it for €10. For my daughter a Renaissance-faire-style brown and green buckled drawstring satchel to wear cross body or threaded through a lady’s belt (along with trinkets like her pewter tankard for ale) for €13. 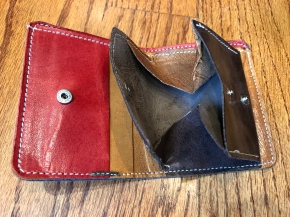 In my mind, I already plan to wear the satchel myself to the Renaissance Faire at home in the fall. We leave and I wave goodbye to Monsieur artisan leatherworker.

Everything fluttering in the mountain breeze holds possibilities for future Renaissance Faire use. (The possibilities dance in my mind like so many lords and ladies dancing for a king and queen.) Shops up and down the streets sell similar handmade medieval and Renaissance style products. Not surprisingly, the Renaissance theme is popular enough to provide continued interest in medieval products, and therefore income to many artisans like Monsieur Bedesse.

In this village, everything offers something for the tourist. Food, clothing, lodging, leather wares, medieval and modern cuisine alike. We stroll in and out of small shops, cafés, and taverns. There is a church. There is a theater. There is a castle. (We learn the payment outside the city’s walls was for entrance to the castle.) I could spend days in this adorable medieval town. It’s much larger than it appears, as you can see from this picturesque postcard. 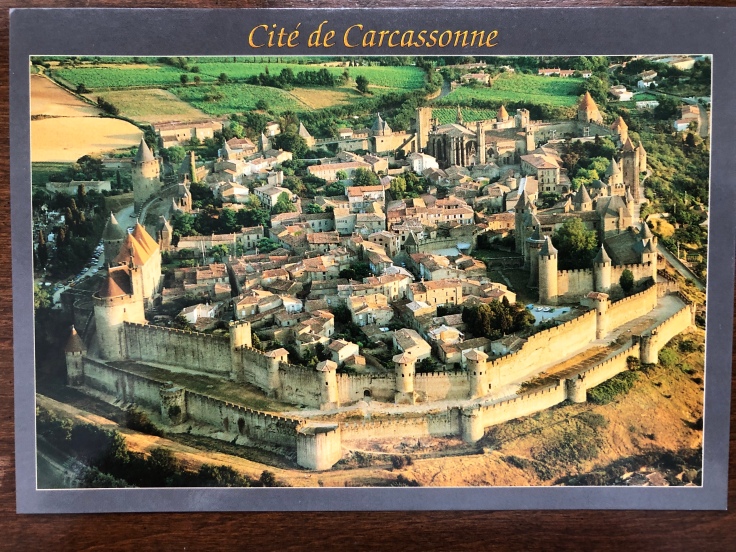 My husband spots two Boy Scouts in uniform. We approach and spend a few minutes talking to them. They are traveling with their troop from Belgium through France during the summer weeks. Our son, also a Boy Scout, exchanges secret Boy Scout hand shakes with them. He asks them about experiences represented by the patches sewn onto one boy’s uniform. We feel rewarded that my son has something good in common with these boys. The scout uniform is a beacon of familiarity in such a big world. Our hearts swelled to find this connection halfway across the world.

One thought on “Secret Handshakes in Medieval France”