I’m a backyard birdwatcher and came across this most excellent, funny, and yes, alarming, series of questions by Buzzfeed’s Erin Chack and answers by Audubon Society’s Purbita Saha. There is so much information and hilarity herein. Please enjoy.

Birds in the News

BuzzFeed Asked a Bunch of Bird Questions—and We Answered 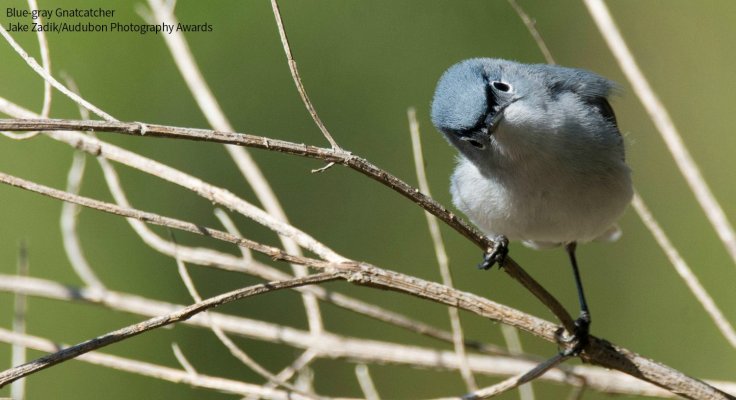 A Blue-gray Gnatcatcher puzzles over you as you puzzle over it. Photo: Jake Zadik/Audubon Photography Awards

Re: “38 Things I Have Always Wondered About Birds”

We at the National Audubon Society noticed you had some thought-provoking questions on why birds are so wonderful and weird and disturbing at the same time. While we aren’t really birds—our CEO is halfway there—we’re basically their human proxies. So, we feel it’s on us to respond on their behalf (except for the Black-capped Chickadee . . . what a lazy bum).

Most birds are weatherproof (they use preening oils to stay greased up; plus their feathers are built to repel water), so they just chill in their typical habitats in the rain. But many smaller species do refrain from flying through downpours.

Whether birds are self-aware is still up for debate (check out this Australian stone-curlew that “fell in love” with its own reflection). But crows, magpies, and other corvids might be: Experiments have shown that they can recognize themselves in mirrors, whereas parrots can’t.

Given the care and energy birds put into incubating their eggs, they must know their bloodline depends on this thing the female just pushed out of her cloaca (more on that nasty word later).

Eggs are dope: In the wild, their colors, patterns, and shapes are incredibly diverse to help increase the chances of survival. African nightjars, for example, lays eggs camouflaged to match the dirt and dead leaves that they nest in. Other species will “print passwords” on the shells to single out imposters. Even chickens can lay speckled eggs—they just typically don’t make it to the grocery shelves.

For the most part, birds are good at identifying their own. But sometimes there are mix-ups, which is how we end up with “whoophill” cranes and “sparred” owls.

Let’s just say birds are better at keeping time than the NYC subway system. Certain species use internal clocks to keep them running on the same migration schedule each year. Others rely on environmental cues like sunlight and temperature to tell them when it’s time to shake a wing. Unfortunately, with climate change messing up the onset of seasons and temperatures, those cues aren’t so trustworthy anymore. (But your sexy calendar idea is definitely worth exploring.)

They’ve sent chimps into space; they’ve sent mutts into space; they’ve even sent Chuck Berry into space. But they’ve never sent a bird into space. Bar-headed Geese have probably come the closest, though, flying nearly 20,000 feet above sea level to cross the Himalayan Mountains. (A stray Ruppell’s Griffon Vulture was once also found close to 37,000 feet above the ground.) The reason they don’t pass out? They have big lungs, take deep breaths, and have the most oxygen-rich hemoglobin.

They’re definitely communicating, maybe screaming, and possibly even conspiring against you. But fear not: You can decipher their calls by learning how to bird by ear.

Are you the evil genius behind @ProBirdRights? Seriously, though, bread isn’t the best bird food: It fills animals up without delivering much nutrition. Depending on the species, insects, native fruits, seeds, and even bacon fat (or a vegan substitute) are much better options.

Goth kids are about as morbid as Pixar characters when compared with Cutthroat Finches. But yeah, birds are cool with bats and will sometimes hang out at watering holes with them—except for the aptly named Bat Falcon, which preys on the furry flyers.

Birds are pretty good at flying around objects—minus things that are practically invisible such as glass. Sometimes they do get stung, however. And sometimes, they track down beehives, tip off humans, and take the honey. SWEET REVENGE.

Hey, it’s not always about humans: Walking is often the best way to scrounge for food. Certain birds are particularly well-adapted for certain terrains—like gallinules with lily pads. Also, you wish had thighs like an Ostrich.

Sounds uncomfortable and unsanitary. Most birds poop, pee, and make babies out of the same orifice—called a cloaca, which is Latin for sewer—so relieving on the run is relatively easy for them. Aside from helping plants spread their seeds, bird poop can provide ancient clues for scientists, as well as help fight climate change.

If it makes you feel any better, though, here are some photos of owls getting stuck in toilets.

Thanks for reading this pelican’s thoughts for us.

Hardly. Yet they are the absolute worst-poached birds on the planet: At least 28 percent of the parrot species out there are threatened or endangered. (They can also be the best neighbors and model urbanites.)

Opposable thumbs are amazing and all, but talons are pretty useful for wielding tools, setting fires, and snatching chicks out of nests. Plus, birds’ necks are so flexible they can scratch any itch and reach every part of their bodies with their beaks. If you’re still not convinced that hands are a bad idea, do yourself a favor and watch this terrifying commercial.

That’s what Clark’s Nutcrackers and Gray Jays are for. Just climb a mountain with a bunch of snacks, put out your hand, and wait. Or you can move to Australia and adopt an orphaned magpie. Whichever gets you more street cred.

Squirrels steal all the seed out of bird feeders, and they poach California Quail eggs right out the nest. Hard pass.

Sometime around 200 million years ago, when birds were part of a group called the theropod dinosaurs, they evolved to have hollow bones to lighten the flight load. It’s really one of the coolest features unique to avians. And yes, birds can be blown around by hot air and hurricanes, but they usually use the winds to their advantage.

We love a good Dad joke here at Audubon, but we have to call out the former president on this one. Not only can turkeys fly, they can also drag race at 60 mile-per-hour air speeds. Also, there are plenty of svelter, flight-abled birds that end up on people’s dinner plates, such as Ortolan Buntings in France and Blackcaps in Cyprus. And if it’s not the birds themselves, it’s their spit people want to eat—as the popularity of Edible-nest Swiftlet farming in Southeast Asia proves.

Nest building is an art. Hummingbirds spin together spider webs to make their delicate digs; honeyeaters decorate their nests with koala-butt fur; weaverbirds construct the bird equivalent of highrises; and male Satin Bowerbirds carefully arrange junk around their homes to flirt with females. But if there’s one group that doesn’t put much effort into nesting, it’s the shorebirds: Most of them will just drop their eggs in a little dent in the sand.

India’s currently having an existential debate over this—and the legal theories are fascinating.

Depends on the flock. To run a battalion of pigeons, you have to know what you’re doing. If you lead your flockmates astray—or even worse, to their deaths—you get demoted to the back of the pack.

“V” stands for very efficient, at least for larger species like pelicans and geese. By flying in this shape, birds can mooch off currents made by the flapping wings of individuals in the front (you can read more about the physics behind it here). Other species might get in more creative formations to evade predators, like the starlings in these beautifulphotos.

We read this question five times and still don’t get it. But birds can “jerk-off,” if that helps at all.

Yes, yes, a thousand times, yes. Glass collisions are the leading factor of birds deaths, killing up to 150 million to a billion in North America each year. On a cloudy night, a well-lit, glass building can take out hundreds of migrants at one time.

Thankfully, there are ways for you to make the windows in your home and office safer. You can also call up to your congress people and urge them to pass new legislation promoting bird-friendly glass.

Let’s clear the air: Birds bathe with their feathers on. Otherwise it’d be much creepier when we spy on them. (Splashy birds are just delightful.)

Do you know what’s in some bird nests? Maybe don’t YouTube it. Oops.

According to Monty Python math, two five-ounce swallows can carry a one-pound coconut. How much do you weigh, Erin? We’ll guess 120, which means you will need 240 swallows to spirit you away.

But the real answer is, birds don’t work for us; we work for them.

That may be an understatement for this unfortunate Turkey Vulture. The fact is, thousands of birds are killed each year from either going splat against planes or from getting shot to clear runways.

Reality television sells across species: Even Norway’s crown princess was hooked on this live bird show.

Well, where else do you expect them to go? Golden Corral? The worst thing about birds is that they can be bad, but still look great. During migration, hummingbirds might eat 100 percent of their body weight and double their mass. Some birds are also content to pig out pretty much anywhere, from trash cans in the city to literal garbage dumps.

They’re fools if they’re going after that bread. Still, Mallards are way more awesome than we give them credit for, and they create new habitat wherever they go. Not to mention they’re great at sticking their landings. So yeah, maybe they’re show-offs, but they deserve to be.

You can have two chicks growing in one egg—either with two yolks or a shared one—though it’s rare that both survive. But there have been twins among Peregrine Falcons, Song Sparrows, and chickens.

Correction: The answer to question #3 was edited to clarify that birds don’t pin their own survival on their eggs, but rather the survival of their genes. Either way, please don’t try to hatch any rocks.