I took these photos 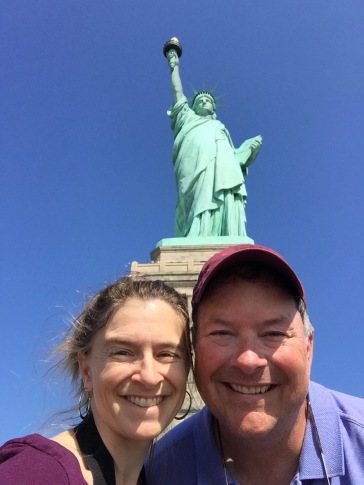 Me, hubs, and the big lady

During our NYC trip in August (or, The Trip Where We Saw Hamilton and Other Stuff Also Happened), our other organized activity was to climb to the crown of the Statue of Liberty.

There are a lot of restrictions to get to Lady Liberty. The statue itself is a National Park, and the tickets, the official tickets, cannot be purchased willy-nilly from any old place. You must use one ferry boat company, a partner with the National Park Service, and it goes to Liberty Island where the statue is located and to Ellis Island, like it or not–though you don’t have to get off the ferry if you don’t want to. (I guess Lady Liberty is like Ellis’ wing (wo)man, because she really draws the crowds, so requiring the boat to stop at Ellis really bumps up their visits.) In addition, if you want to go up to the statue’s crown, you can’t just buy tickets the day of or a few days in advance; it requires a couple months of advance planning. Good news for those who visit with short notice, you can go up to the pedestal with the other last-minute jebronis, but you won’t be able to go up to the crown.

Some facts you may or may not know about the Statue of Liberty:

Sources not linked above: All about Lady Liberty on the NPS site. This great non-fiction graphic novel I bought for my kids while there. More unusual facts about the Statue. Thanks for reading! If you’ve ever been to the statue, tell me about it. Scroll down for a few more photos.