Greetings friends! We took our trip to New York City. It was fabulous, wonderful, memorable. We were so fortunate to be able to stay right in Times Square and loved walking around, gawking at the sights. If you are a New Yorker, I’ve heard you do not like Times Square. Did you know that mentioning Times Square makes New Yorkers roll their eyes? It’s true. But guess what? I am not a New Yorker. And Times Square is magical, brightly-lit fun! If you could find the space amid The Statue of Liberty walking around on stilts, Elmo, Batman, and the crush of the other city-goers, you could twirl around with your arms spread out under the dizzyingly tall, flashy electronic billboards and and revel in being in a place like no other. However, there is a lot of hustle and bustle there, like it or not, and there’s not alway room for twirling. And even if you are a New Yorker, you must go to Times Square to experience Broadway and all the musical theaters and plays it has to offer.

Let me see, so, Hamilton. If you know me IRL (or have read a couple of my previous blogs like this one or this one), you may know that I am crazy about Hamilton and its creator Lin Manuel-Miranda. (I know there are many fellow #Hamilfans out there and I salute you.) In fact, I have friends who thought I had already seen Hamilton because of my knowledge of and (what I consider to be a reasonable) obsession with the show. (Side note: The first time I saw the show was August 2017.) But really, all you need is the soundtrack to draw you in.

Our hotel was literally adjacent to the Richard Rodgers Theater where Hamilton is currently running. I didn’t realize we’d be so close. Swoon! As such, there was no shortage of opportunities to take pictures of ourselves in front of the theater almost every time we walked by, each day we were there.

My hubs is a Hokie

Our hotel looming behind the theater

Too much is never enough. Note hip businessperson walking by.

The night before we were scheduled to see Hamilton, we decided to see another show off Broadway. As I had mentioned in last week’s blog, I was not interested in seeing another musical that might dilute or distract from the experience of seeing Hamilton. I had heard of a play called Puffs, frequently promoted in my Facebook feed of late. Puffs is a show touted as a play “not to miss” if you’re a Harry Potter fan. I thought it would be something totally different from Hamilton, and being HP fans, we purchased the tickets at TKTS and made our way directly to the off-Broadway theater, a few blocks from the buzz of Times Square. (More about Puffs in a separate blog.) After Puffs ended we strolled back to Times Square towards our hotel.

At this point, the Broadway shows were also ending their evening performances. As we passed the Hamilton theater, we slowed to a stop at the metal barriers surrounding the Hamilton cast doorway (a side door away from the main entrance where cast members enter and exit the theater). This is where, after the show, fans gather to moon over the actors, request photos and signatures on their playbills or any other item one might have (posters, shirts, hats, body parts). A woman was standing there with her Hamilton: The Revolution book in hand, chatting with the theater’s security guard. We struck up a conversation with her; she had seen Hamilton the previous night but forgot her book for signatures afterwards. So tonight she was determined to get the signatures. Suddenly the idea of meeting the cast—at any moment—was too alluring to leave. So we stayed. We could tell when the show ended as the crowd increased around us. We didn’t have a playbill for signatures, so we decided to request photos instead of signatures. Every time the door opened, the crowd inhaled with expectation, and after many let-downs as the musicians and stage hands (I’m guessing) came out and scurried away down the street one by one, not making eye contact with the crowds, one of the more famous actors finally emerged from the doorway and the crowd pressed us towards the barrier as he started his rounds through the crowds. The cast members were happy to pose for photos, smile, and chat with people—especially kids—and sign anything thrust at them. When he made his way to us, the kids asked if he’d smile for a photo. He patiently obliged and I snapped a great photo of him with the kids. Squee! #Hamilfans. After he moved on, we slipped away from the hungry crowd, discussing with a new energy the logistics of how we would return to the barrier for more signatures following our show the next day. 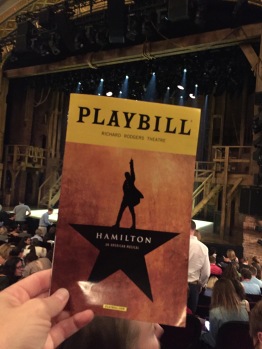 When we saw the show, there were many elements that we expected but there were also a few things that were unexpected. We were delighted to find that the show was even funnier in person when you can witness first-hand the facial expressions, physical comedy, and body language (these items do not come with the official Broadway cast recording). It was also interesting to hear the audience react. We were prepared for much of the humor that is conveyed through the lyrics. I wondered as the audience laughed—in all the right places, reacting to the show—if they had never heard the songs before. I suppose, of course, that is the case. If you haven’t heard the music because “you don’t like rap music,” I promise you, it’s still worth a listen, even if you never plan to see the show. Also, though you can hear every single word that the cast is singing or speaking even at its most rapid-fire moments, in the case of Hamilton The Musical, I would recommend people listen to the music before they see it just because there are so many words coming at you that I can imagine your mind would be reeling with the lyrics at high speed plus the action. I’ve even heard, as blasphemous as it sounds, that people have attended the show and walked away without enjoying it because it was simply too much information, too many words, too overwhelming to grasp.

Even after listening to the music for a year, I still found myself caught up in the story, able to appreciate the performance, the showmanship, the amazing physical demands on every performer—dancing, leaping—while also singing, and the depth that the ensemble brings to the show physically.

Even though it was not the original cast performing (and we feel like we know them even though we don’t), it was still a pleasure to watch these people breathe life into this story. I found myself sometimes placing an imaginary layer with the original cast members over the ones performing on the stage. I felt able to appreciate both performers at the same time. All that to say that it lived up to my expectations and then some. I would go see it one hundred more times. (If only!)

Following the show, we executed our plan of who would go where and found ourselves again at the barrier anxiously awaiting the cast members. This time, we were prepared with our own Hamilton: The Revolution book as well as our Playbills, with ten times more energy than the night before since we’d just exited the show. We chatted excitedly with the other fans, some who had just seen the show like we had, and some who were fans but who had not seen the show (like us, the night before). Again, the cast came out and were gracious, kind, and patient with the fans. If I were in a Broadway show, I would sign every last playbill for every last fan, taking advantage of every moment in the spotlight (or even in side lights) and those actors likely feel that at some level. They know they won’t be in Hamilton forever.

All told, the show was truly memorable. I loved our trip into the heart of Broadway. Whenever I’m there, I feel distressed that I’m not seeing enough shows and I want to return again and again and again to see all of the wonderful amazing performances going on all the time in New York City.

Have you seen any amazing shows, whether locally or in the heart of New York City’s Broadway? What made a show memorable for you? Have you seen Hamilton? Do you have any opinions on it? What shows have you seen that stayed on your mind long after you left the theater?

5 thoughts on “Hamilton: A Dream Realized”